Visa overhauls brand with new logo and campaign, its first from Wieden+Kennedy

New push will roll out during the Olympics
READ THIS NEXT
‘Behind the Music’ makes a comeback on Paramount+ and toymakers give business updates: The Week Ahead
Credit: Visa

During the Olympic opening ceremonies this Friday, Visa will unveil a new brand campaign and look, its first work from Wieden+Kennedy after appointing the shop its agency of record in December. Yet while Visa is a long-time sponsor of the games, the new work is not an Olympics campaign. Instead, executives say it is a reintroduction of the company to consumers that is meant to run for years to come.

“This isn’t an Olympics campaign—it’s a broader company and brand strategy we’re unveiling during the Olympics,” says Lynne Biggar, executive VP and global chief marketing officer, at San Francisco-based Visa, noting that the work has been more than a year in development. “Visa is understood really as a credit card company, but we are so much more than that.”

See all of Ad Age's news coverage of the Tokyo Olympics here.

A 60-second spot aims to communicate just what else the 63-year-old marketer has to offer. It shows how Visa acts as a network between entrepreneurs and shoppers, helping move money from one person to another, particularly by facilitating digital payments. “It’s the wizardry behind the scenes, connecting just about everyone to just about everyone else,” a female voiceover says. She ends with, “Meet Visa. A network working for everyone.”

Previous large-scale campaigns for Visa were voiced by Morgan Freeman, but Visa broke with the actor in 2018 amid allegations against him of sexual harassment. A spokeswoman did not say if Freeman has appeared in any recent or current Visa work.

Biggar says that COVID-19 and its continuing impact have made Visa even more relevant to businesses and consumers on a global scale.

“There were many developing markets in the world where, walking into the pandemic, it wasn’t so easy to order groceries online or figure out how to get what you needed,” Biggar says. “Visa played an important role in how to educate consumers, how to navigate supporting small businesses, half of whom didn’t have any ability to do digital commerce.” 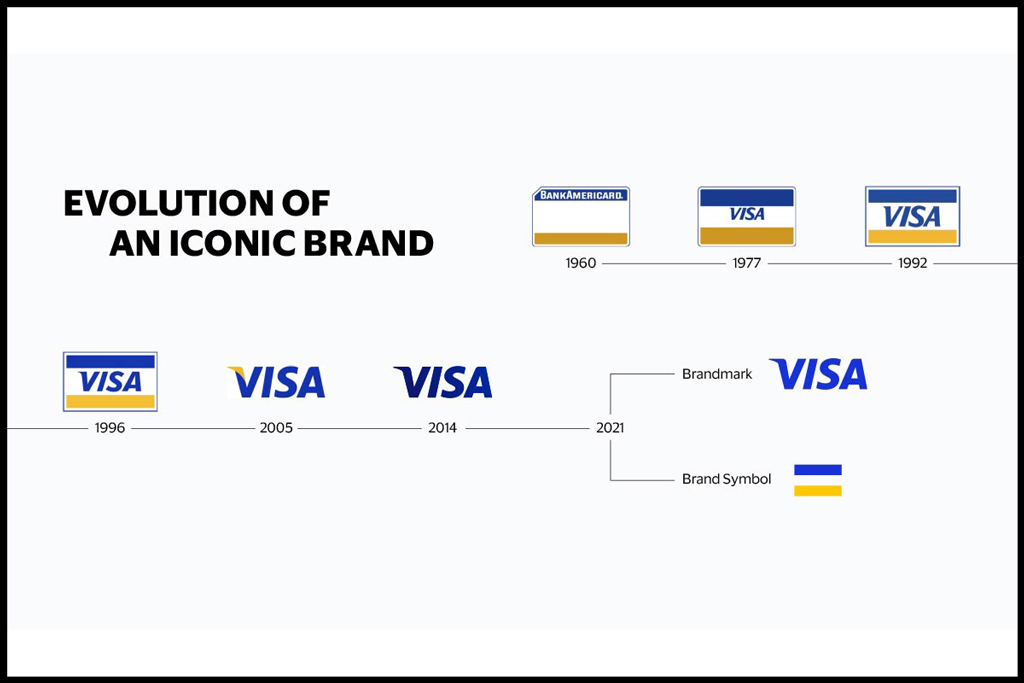 Visa is also rolling out an updated logo that includes a wordless symbol of blue, white and gold, and a brighter blue Visa brandmark. The company, which is still using its tagline “Everywhere you want to be,” worked with brand design firm Mucho on the new visual identity. The changes are reflective of the number of places where the Visa mark could show up, including on small electronic devices. Competitor Mastercard updated its logo by removing the accompanying words two years ago.

Visa has been gradually changing its brandmark in recent years. In 2005, it abandoned the credit card border around its name. Most recently in 2014, Visa got rid of the gold in its “V” and went with an all-blue that was darker than years prior.

Visa’s new push will include a series of 15-second films, as well as social media and digital advertising. Publicis handled media duties.

The payments company is also planning to roll out an Olympics-themed campaign in the U.S. and Canada featuring Olympian Madeline Manning Mims.

Adrianne Pasquarelli is a senior reporter at Ad Age, covering marketing in retail and finance, as well as in travel and health care. She is also a host of the Marketer’s Brief podcast and spearheads special reports including 40 Under 40 and Hottest Brands. Pasquarelli joined Ad Age in 2015 after writing for Crain's New York Business, where she also focused on the retail industry.